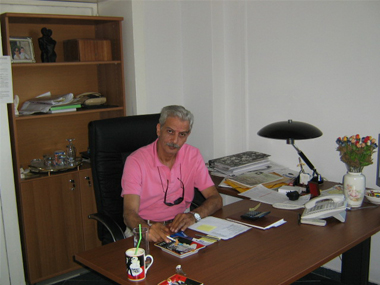 He was born in  Amfiklia on the 8th of July 1954. He was very fond of his place of birth and the memories of the childhood he spent there would accompany him all his life. He never renounced the linguistic singularities of his native region, to the point where he would emphasize them... on purpose!

He completed his basic education in the 4th Lyceum and then tried to enter the Military academy. However his request was rejected due to the tense situation in Greece at the time, and his participation in the 1973 Athens Polytechnic uprising against the military junta, where he was wounded and imprisoned in a Mediterranean island.

He also had an artistic nature, and an interest in painting since childhood. He passed the exams for the National School of Theater where he studied for a year and a half, gaining excellent reviews from his teachers. He played in theatrical productions, in series for the ERT (Hellenic Broadcasting Corporation) and in supporting roles while he studied in Italy.

He left for Italy in 1974 to study medicine in the University of Parma for two years before he transferred to the Medical School of the University of Rome. During his stay in Italy, he was strongly invested in politics:
• 1974-1989 he was a member of the Rigas Party
• 1977-1985 he was the Italian secretary for the Rigas Party
• 1982-1986 he was the Rigas Party Counseling officer for western Europe
• 1985-1989 he was a member and General Secretary for the federation of Student Associations in Italy(O.S.F)

Through these actions, he gained a lot of experience and met historical figures such as Enrico Berlinguer, Leonidas Kyrkos, Andreas Papandreou and Melina Mercouri. 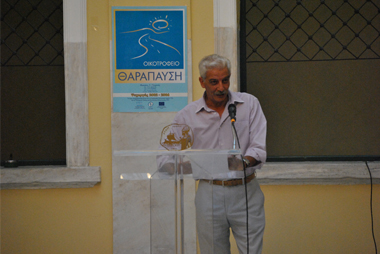 In 1990, he returned to Greece where he worked on various clinics and organisations such as:
the Saint Helena clinic, the Saint George Elderly Care Unit and the Elderly Care Unit called The Mansion (To Arhontiko). He was president of the Children's Development Center of Piraeus (PAKP, which stands for Paidiko Anaptyxiako Kéntro Peiraiá), he designed and implemented the pilot phase a programme called «Help at Home» (Prógramma Voítheia sto Spíti) in the municipality of Korydallos and worked as Structure Coordinator for the NGO «KLIMAKA».

In parallel with his medical work, he did not renounce his love for politics and was candidate MP for Fthiotida with the «Political Spring» party, representing the left. 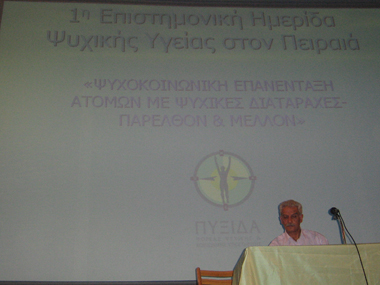 His masterpiece was the foundation in 2005 of the NGO «PIXIDA», whose objective is providing physical, mental and social support. In 2006 he founded the boarding house «Tharapafsi» aimed at allowing the psychosocial rehabilitation of chronic mental patients while participating in the psychiatric reform of the country through the «Psychargos-phase V program», and in 2012 he started the operation of sheltered housing, the goal of which is to continue the psychosocial rehabilitation of mental institutions’ patients.

In addition to these Mental Health facilities, he organized lectures and workshops focused on raising public knowledge and awareness on mental health issues. In 2008, he became a member of the Coordinating Committee of Organization Nations for Mental Health named «ARGOS». 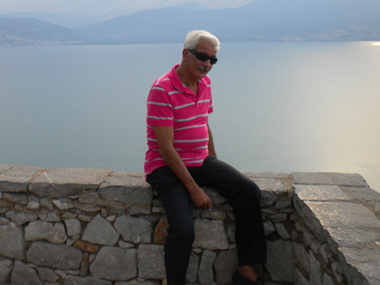